Tomorrow morning at this time I will be on a plane headed home! I have been waiting for this day since the moment we found out we were moving here. Nevermind the fact that the total travel time for me exceeds 30 hours! Hubby and kids will follow in a week, but in the meantime I can't wait to be with my mom and dad. I also look forward to seeing friends, EAT all the comforts from home (click here for my list), and shop for staples to bring back.
Oh yeah, Christmas and New Years are in there too!
But before I go,
here are a couple of cool things that happened this week.
Do you remember this post? If you don't want to click on the link, it was a post about "Being Mormon in China". Well, apparently there is not a lot of info out there on this particular subject because 2 different people, from two different countries have emailed me about it. The first was a Chinese guy who joined the church while studying in Malaysia. He wanted to know if he could serve a mission when he comes back to China. The other was from a member of the church in Saskatchewan, Canada who had two Chinese citizens get baptized in his branch while studying in college there. He wanted to know where to tell them to go when they returned back to China. As a blogger it is rewarding to know that your thoughts and information touch people in positive ways.
We have made the "big time"! 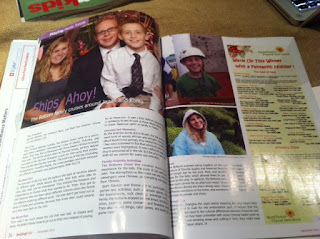 Well, not really, but this is a copy of this month's Beijingkids Magazine. There is an article in it about our recent vacation to Japan and South Korea. But honestly, they didn't contact me because I am a terrific writer. They didn't contact me because I have the most beautiful kids in the world (although I do!). Actually, there was a call out for articles on a yahoo!group that I am on. I emailed them and told them where we went and they asked me to write about it and submit pictures. Fun and one more thing to check off the bucket list before magazines are replaced completely by blogs a thing of the past.
Next post will be from the States!
Zai Jian!
Posted by Unknown at 4:13 PM 2 comments:

Have you ever done something that you never, ever desired to do?
I took four years of French in high school (as did many of you). I remember a time where my dreams would have phrases en Francais. Then when I traveled to France twice I could not understand or speak anything! That was when I decided that I would be monolingual forever.
When I first found out we were moving to China I actually said, "I am going to live there for two years and not even try to learn the language." I mean Mandarin Chinese? Isn't that like the most difficult language on the planet? Isn't that the language that you say , "at least it's not Chinese" to in reference to ALL other languages?
We have been here four months now. I realized quickly that the above approach kept me feeling very isolated. It stressed me out that I was going to need to learn a language that just sounded like mumbling (sometimes very angry mumbling). Around this time transportation caused me severe panic so I knew someone would have to come to me. 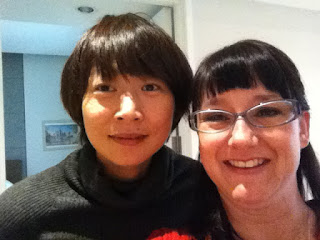 I found Lily! She comes to my house on Monday and Thursday and we laugh A LOT! She is incredibly patient and speaks very good English. I now understand why every expat says that their Chinese teacher is the best AND why they count their Chinese teacher as one of their closest friends here.
Tones? What are tones? We began with 10 lessons (20 hours!) just on the four tones of Mandarin. It has been very interesting dissecting a language and have been very grateful that we learn English while we are toddling around.
Mandarin consists of two forms: characters and Pinyin. In the 50's the Chinese actually took the language and created words with the alphabet to make it more accessible to the world. They were smart because Mandarin is predicted to be "the language of the future world". I am not learning the characters, only the Pinyin.
At this point I have no desire to become fluent in Mandarin. I only wish to communicate as I live here. The rest of my family is learning both characters and Pinyin. It is great to have something in common, as we are all beginners learning differently. Hubby is fluent in Japanese so he has a leg up though. I hope my children will become fluent. It is a total myth that just living in a foreign country magically makes you fluent! I have heard people who have lived here for two years and can "just get by". I chose to set my goals pretty low.
I have learned that while I would have NEVER chosen to study Mandarin, I am enjoying it. In the four short months that I have been here I can actually decipher words among the "mumbling" and I hear the patterns of the language. I can't wait to be able to go back to San Francisco and talk to the Chinese street vendors!
Posted by Unknown at 10:07 PM 1 comment: 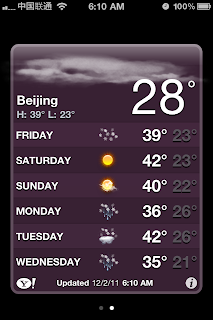 It's Winter!
Posted by Unknown at 3:31 PM No comments: