Remember this post? If you do not want to hit the link, I'll remind you...I frivolously bought the more expensive bottled soda because the labels were so much prettier...Well, now look at them! 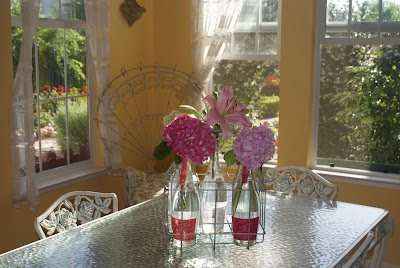 They are just about the cheapest set of bud vases I could find and they look so pretty! Not just the labels, but the shape of the bottles practically transport me to a cafe in Paris!

To keep them beautiful, use mod-podge (or watered down white glue) over the labels. A little extra $ one day brings a little joy time after time.

Labels: my favorite view, on a budget

I began this project here. It has been fun and challenging and it has gone much, much slower than I thought! But when I was beginning to feel discouraged I came across this post by Melissa .
It was so inspiring and great comments by Layla.
That was all I needed to keep me trudging along. So I finished the upholstery part of ONE chair today. 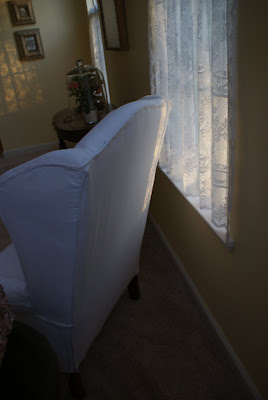 This is without the "t" shaped box chair pad that I worked on for 6 hours last Saturday. Once I finished I put it on and it just looked not right. My next step is to go back and redo that. 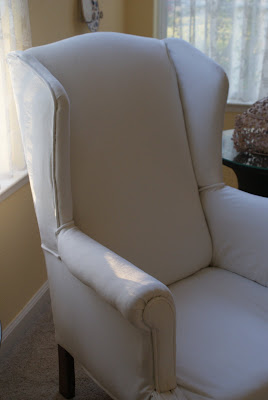 Below is picture of what it looks like without a skirt. This is how hubby prefers it. 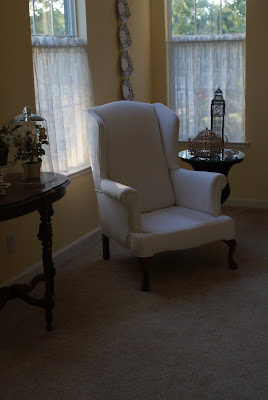 Here is a pic with the skirt (unhemmed and pinned on). I love how it looks! 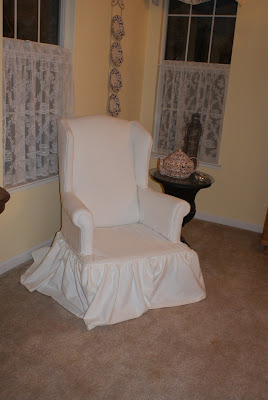 Which do you prefer? With or without the skirt? Remember none of the pictures have the chair pad pictured, so it is a bit unproportioned.

a boy and his fish- chapter 3

If you would like to read the beginning of this story, check it out here.
Chapter 3- "A Conversation About Death with A 7 Year Old"
The day began as a normal Monday. The house was a buzz with chores and music. One of the chores on the list was to clean out the fish tank. Dayton's mom had done this quite a few times in the last month so she expected it to be routine. However, it ended with the death of one of the fish. His mom did not do anything different, however one fishy (maybe Nemo, maybe Marlin *i still didn't know which was which*) seized to swim any longer.
The children took it much easier than the mom. Flashbacks of Gonzo swam in her mind. Dayton preferred to bury the fish in the yard. And that is exactly what they did.
A little while later, while running errands, this is the conversation that Dayton had with his mom.
7 year old: maybe the fish is in heaven or maybe it went to the other place.
mom: i don't think fish go to hell, honey.
7 year old: well, if they do something bad like murder another fish they would.
mom: i don't think fish murder.
7 year old boy: i hear that they are using water guns lately.
mom: laughed so hard she couldn't speak!!!
Posted by Unknown at 6:51 PM 5 comments:

You remember I started this project this week. So far this has been a fun, easy project. When I say easy I do not mean quick and thoughtless. It is taking much, much longer than I anticipated (don't they always?) and there is a lot of thinking that goes into it. Each part is a process but it really is just like wrapping a present. 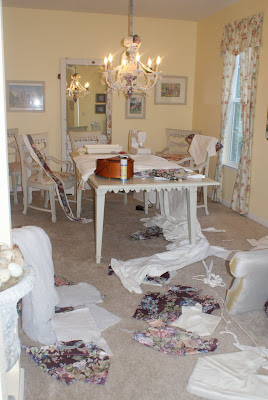 My workspace currently. I woke this morning at 5AM to try to get some quiet work in before the rugrats woke up. You see, they are off of school right now and either they are "helping" or near me screaming, singing, arguing, etc. Ahhhh, the peace and quiet! 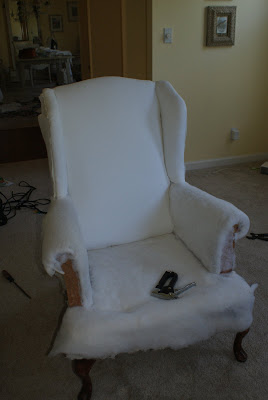 Two wings and the back pad done. Did you know staple guns give you blisters? 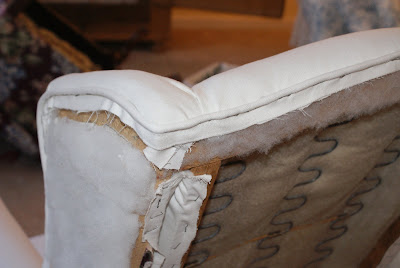 The welting has begun. I love the details that make it look professional. 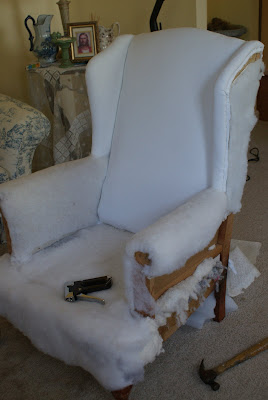 Did you know that most of it is pulling fabric through openings in the frame?I decided to NOT do both chairs simultaneously so that I can look at the purple one as a guide. I am not sure that was the right decision or not. The thought is always looming in the back of my mind. "I am going to have to do this all over again!" 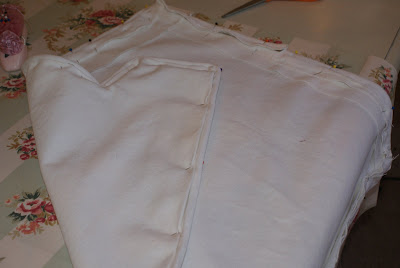 Today I am working on the box chair pad. More sewing machine today than staple gun.
♪On a completely different note ♪
Hubby is on his way home from Europe right now, YAY! And my niece is in labor! Today is a GOOD day!

Remember I was going to trash these two wingback chairs on the curb for the big pick up? Well, I didn't, thanks to many of you encouraging me. So I went to the library, checked out
a book on upholstery and away I went! Here is the before picture... 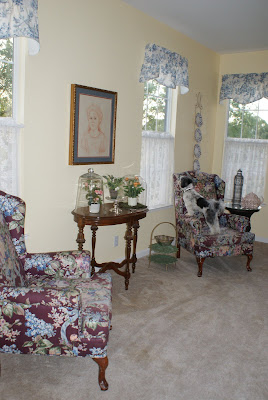 Here are the main tools gathered and ready to go. I chose white denim as the fabric. I was excited to get it on sale for $4.99 a yard! So far, with fabric and all the tools I have only spent $137.00. Much better than $550 ( not including fabric) for the upholstery quote. 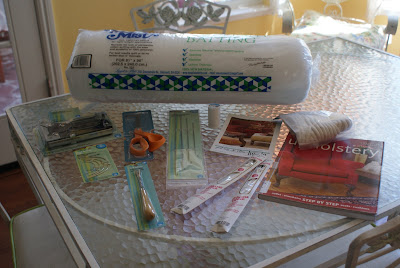 After 6 hours of E and I working on it, here is the progress of ONE chair. It is not hard work, but it is tedious removing the million staples that keeps it all together. It is a bit painful too! 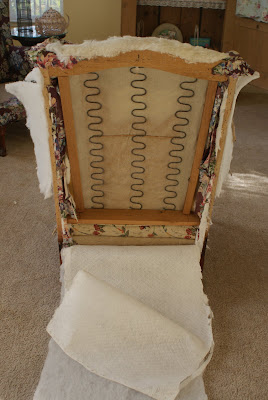 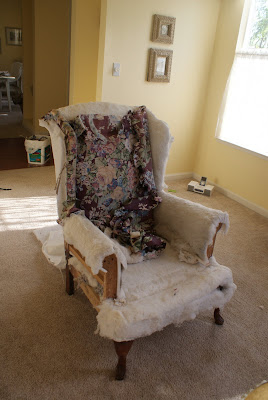 And at that we call it a night! Thanks E for your help, I couldn't have done it without you! Stay tuned for the progress!

So NOT on a budget

So I am hosting a little neighborhood breakfast tomorrow. Everyone will be bringing goodies but I am to provide the beverage. I am driven by vision and I had a vision of sparkling juice bottles chilling in ice. So off to Cost Plus World Market I go!

You've heard me rant and rave about living on a budget and I totally threw that out the window today! I bought sparkling water for $1.54 MORE JUST FOR THE CUTE LABELS! Ugh!

Have you ever done this? Have you bought something more expensive just because of the look? If so, I want to hear about it!!!! I lost all common sense because I am such a sucker for a French label (good thing I don't drink wine!)

Labels: hostess with the mostess, on a budget 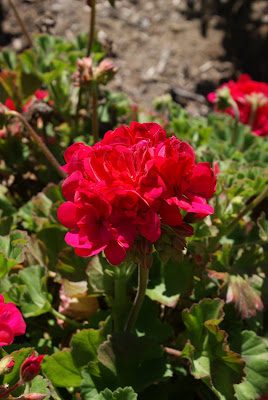 My Nana was a strong, Italian woman. When I was little she was already older than all of my friend’s grandmas. She was not the grandma who knitted. She was not the grandma who smothered us with kisses. But my Nana cooked and was a gardener.
She lived in a tiny apartment with a postage stamp plot of earth. What I remember the most about my visits to her as a child are the smells. Her garden’s aroma was pungent, but it was not the roses or lilies that beckoned, it was the basil and swiss chard. These were the scents that would make a passerby turn they head with interest.
Nana could grow anything from a “slip”. Her entire garden consisted of slips from other yards. She could pluck a stem from just about anything, stick into the soil and it would grow. She would often give away slips of her vibrant geraniums. When I grew up and had my first home I couldn't’t wait to create a garden of my own. When I would visit Nana she would send me home with slips of cherry red geraniums. I would place them in the ground and soon they became a bush of vibrant color.
As my garden began to flourish Nana passed away. The blooms in my yard always kept her close by. Soon we began to outgrow our little start up home. Due to moving circumstances I was not able to take any slips of geraniums with me. Leaving that home was difficult, but I knew I would always have the memories. What I would not have were my Nana’s geraniums.
I would sometimes drive by that first home and wonder if I should explain to the homeowner the significance of the geraniums and just ask for a slip. My nerve never allowed me. One day as I sat on my sister’s back porch I noticed the vibrant bushes that flanked her garden. I asked if they were Nana’s geraniums. When she said yes, she knew why I began slipping the stalks. Now as I look around my garden I have Nana’s geraniums in the ground, in urns and in window boxes. They are much more than just a flower to me.
Posted by Unknown at 7:25 AM 7 comments: