I have hit a milestone in blogging! Just as our internet started working a little more consistently, I sat down to blog this promised post. Then Google told me that my picture storage was full. I didn't even know there was such a thing. So now I pay $2.49 a month to keep blogging with pics. Enjoy!

I never pass up the opportunity to pat myself on the back in my progression of Chinese immersion. This event only half counts because it is not my surgery, so I don't really earn the right to brag about how far I've come. Just noting that I once was very, very adamant about not doing any sort of healthcare here in China. So I have come a loooong way in allowing my husband's arm to be cut into...here in China.

Hubby has been having shoulder problems for years and years. A friend of ours was in the hospital recently and we went and visited her. We had heard about this new hospital, and the surgeon, from a handful of friends who found themselves needing surgery here in Beijing. Seeing how nice the hospital was became our first step. Our friend introduced us to the surgeon and before we knew it his surgery was scheduled.

On Monday, November 12 Hubby and I taxied to Oasis Hospital for his 6:00 surgery. Immediately it felt like we were checking into a nice hotel. He had a large room with a pull out bed for me. These nurses were equally concerned for my comfort as they were the patient's comfort.
The first step was to shave half of his body down. This should be really cute in Hawaii next month. The nurses giggled as they shaved and one even said, "I like Chinese men better, nice and smooth." The next step was the IV. Hubby was super nervous about it, which made the poor nurse nervous, which resulted in a non-successful IV...a few times.
After a couple of hours it was time for him to be off. I went back to the warm room, it is cold here in Beijing, where I used a healthy amount of free/FAST wifi! The surgery was supposed to last two hours. 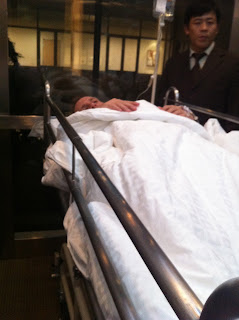 I got to order his dinner since he would be in surgery...score!
After two hours I still hadn't had an update, although I knew he was in good hands. He has had numerous surgeries so I knew he handled surgery well...He's a little accident prone.
Finally around 10:30 pm he was wheeled in. He was out of it. Getting him into bed and setting him up was hilarious! It was hilarious because all the doctors and nurses were speaking English but Hubby was speaking Chinese! The Chinese was very elementary, his voice was rough from the oxygen tube and he was very drugged. I had intended to stay the night but then I figured he didn't even know I was there anyway. I headed home at around midnight to make sure I was there with the kids and help get them off to school the next day.
I arrived back the next morning at 8:00am, equipped with books and movies to watch. I was pretty happy to be able to take care of someone, it gave me a purpose (while still relaxing:) I quickly found out that he did not sleep well and had chronic hiccups. Bad hiccups that hurt and interrupted his sleep. This went on the entire time he was in the hospital. The Doctor inserted something in his ear that was supposed to help. It didn't. 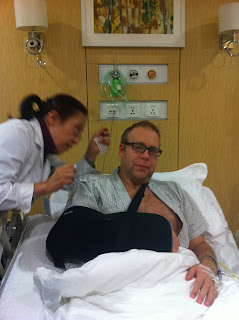 A big difference between US healthcare and China healthcare is that the day after your surgery you are NOT kicked out of the hospital. As a matter of fact, Thursday was the very earliest he would be able to go home. He had a business trip planned and was still thinking he would attend. He even packed a suitcase with work clothes so that he could go straight from the hospital to the airport. My husband is a workaholic man with a very strong work ethic.
On Tuesday night the kids were able to visit Dad (and eat his food). They had a great time and it lifted hubby's spirits. 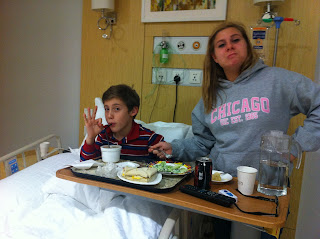 Although, honestly, he didn't really need his spirits lifted. He was very popular with the nurses. First off, there were only three other patients. Second, they thought he was so funny.
Details of the surgery: The ligaments and tendon were one-fourth removed from the bone. They had anticipated going in, cleaning it up and maybe attaching an anchor. After they went in they found it was much worse than they thought and put in four anchors. All of that with just three small incisions.
So by Thursday he was not able to be released because he was not sleeping well. The doctor kept him in until Friday afternoon. The kids had that day off of school so D and I hung out at the hospital until Dad was discharged. Needless to say, everyone was in agreement that the business trip was a no-go!
It has been about a week and a half since the surgery. I was told, by the Doctor, that I needed to come to the follow-up appointments with him. I soon found out that I was there to get grief about not nagging him enough. He is doing way too much with his arm and, for some reason, I am to blame. For the record, I guess I am not a nag after all! For two more weeks he should have very limited use of his arm. It will take at least six months to have complete mobility. In a year his shoulder should be as good as new.

Bottom line: Healthcare in China doesn't have to be...Chinese. We are very happy to have found Oasis Hospital.
Hopefully, though, we will not need it again.
Posted by Unknown at 2:52 AM 1 comment:

Thanks for sticking with me friends! Our Internet is still not up and running effectively here in China! All Google sites are locked down on my laptop, despite using a VPN ( a personal network that jumps the Great Firewall). I can, sometimes, get on a Google site on my iPad, as I am now. But it is inconsistent and brief. So here is a quick update about where I am and what I am doing.Sorry, no pics until it gets worked out.

After a month of having Traditional Chinese Medical treatments I am not feeling any better with my herniated discs in my neck and back. I had a few enjoyable medical massages, but the pain came right back. I also had acupuncture. Someone asked me before if acupuncture hurt...well, at that time I had only gone to a "salon" to have it done and I couldn't feel a thing. Now I understand that I didn't need it in those spots because doing it at a TCM (traditional Chinese medicine) doctor hurt like heck!!!! He lined them up in my back and down my leg, all the way to my foot. The needles probed right into my nerve! It felt like metal to metal for twenty minutes. Then he'd come in, give them a flick and a twist, and I'd lay there for another ten minutes. I hated it, but was willing to keep at it if it helped.... I didn't feel it did. They now were talking about a soaking technique and me drinking some nasty Chinese stuff. Huh-uh! I am out! Of course, I am being told that I am not giving it enough time and I need to stick with it. I guess I truly am a "westerner" through and through.
Posted by Unknown at 4:18 AM No comments:

It is no secret that I have been on "lock down" for a little bit and it was driving me crazy! If you live under a rock (which is exactly how I felt) you might not know that China is changing leaders for the first time in ten years. At the annual Congress, that took place for ten days here in Beijing, the "party" met and basically messed up the internet for everyone. Actually a lot more happened than just the internet being locked down but that is an entirely different blog post! I don't get very deep here at TimeOutForMe, so I will get back to my usual frou-frou posts. You don't even want me to get started about US politics!


The next set of pictures are of the Beijing Lama Temple. A friend and I moseyed around there on a lovely Tuesday morning. 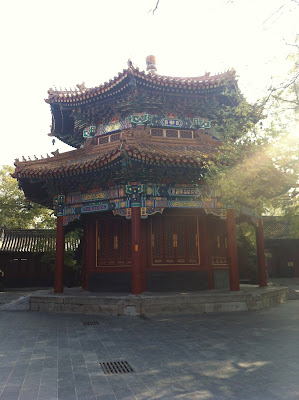 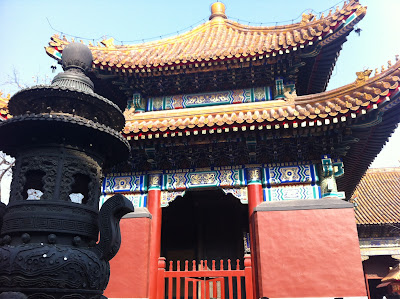 Since the Confucius Temple was nearby we decided to expand our moseying. It was a pleasant, serene surprise. 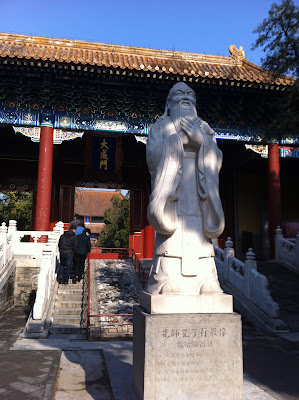 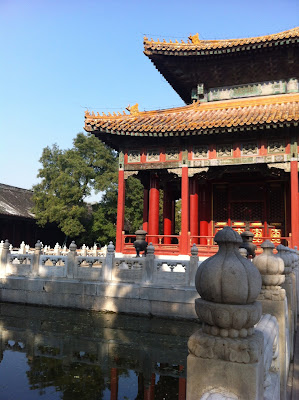 It was a busy, busy week. We headed out to the kids school two nights in a row. That is not a big deal for those of you who live within five miles from your school. We live 27 kilometers from our kids school, and with Beijing traffic it takes us an hour to get there. But the kids are so worth it!


You may recall over a year ago when a group took me out to the "Trash Man". I had only been here a week or two and was completely overwhelmed. Well, it was time to go back.

This Week (10 days) In Pictures

Below is a series of signs we took on our mini road trip.
Here in China these road signs are hilarious.
The pictures are only half the fun.

Hubby planned out a place to take us. Unfortunately, like many things in China, planning does not always guarantee success. We never made it to where he intended but had an adventure anyway.

Back in the city we decided to take advantage of our rental car and run some errands.


Even with a back injury I still managed to see and do many things. I hope you are enjoying all the pictures!
Posted by Unknown at 3:54 PM 1 comment: