a boy and his fish- Prologue & Chapter 1

Prologue- Once upon a time there was a young girl. She looooooonged for a pet. She would dream about having a pet that would be her very best friend. One day her dream came true and her parents bought her two goldfish. The bigger goldfish was named GONZO and the little goldfish was named OLIVIA. The little girl was so excited she could hardly step away from the fishbowl.

A couple of days later Olivia was gone. The little girl was sad, but happy that Gonzo had a nice, big meal. Something about Gonzo having Olivia for lunch was magical because Gonzo lived for many, many years. The little girl and Gonzo were very best friends, he knew all of her secrets. Gonzo even did tricks. He would come up to the top of the water and blow bubbles as if to say, "Good morning my friend!" He would also follow your finger and swim forward AND backwards. The little girl did not like the yucky job of cleaning out the fishbowl, but knew it was important to take care of her best friend.

Six years later the girl was not so little anymore. She was in 6th grade and loved music and hanging out with friends -not much has changed there- One night she was able to go to her first Duran Duran concert with many of her friends. She got home very late and was wearing a cool outfit and was singing "The Reflex" knowing that this night would be one of the most memorable nights of her life!

Cue sad music- When she went to say hello to her best friend Gonzo she could not find him. Her heart began to race. She quickly searched the small tank. She scanned the turquoise rocks and the plastic "no fishing" sign. She examined the artificial plants. NO GONZO! As she stepped back to get a better look she felt a squish under her trendy oh-so-cool flats. She looked down and saw Gonzo laying on the faux linoleum brick . The girl thought, "I didn't know goldfish have red blood." Then it hit her! She stepped on Gonzo! A scream shot from her throat. Her family ran from their beds to find her. All weeped as the girl's father picked Gonzo up with a serving spoon and put him in the garbage disposal.

Yes, that night was memorable for the little girl. Not because she had seen five British men dance and sing her favorite songs on stage, but because she lost her best friend. She vowed never to have another fish for the rest of her life.

Chapter 1- Dayton was a very imaginative boy. He liked to build things out of garbage. His imagination often took him back in time, to the moon, and inventing many cool gadgets to save the world. Dayton loved his dog, but felt he wanted a pet of his own. Whenever he asked his mom she quickly said, "No!" He even begged to visit the fish at the local pet stores to try to convince her. His mom would not budge.

He didn't understand. He knew his older sister had received fish for a couple of her birthdays. He knew they had died but wondered why his mom would not give him the same chance. ???

One night, when Dayton was 7 1/2 years old, his friends invited he and his sister to the local carnival. The colorful lights danced and danced as he went on ride after ride, laughing and giggling. Could the night get any better? Then he saw it. The "Win A Goldfish" sign- one of the great benefits of just learning to read! The father's friend saw Dayton's eyes and offered to let him play. Sure enough, Dayton had gotten those pingpong balls on two bowls! He couldn't believe he was now the owner of not one, but two! goldfish.

He was so excited to show his mom and dad! He couldn't wait! When they got home (very, very late) his mom was angry. She had been very worried about her kids. Then she saw the bag with the goldfish. Her eyes grew big and memories of her childhood friend, Gonzo flashed in front of her eyes. She immediately said, "You can't keep them!" Dayton's heart sank.

"I know mom, I can give them away. I'm sorry I didn't ask first." He hunched over and walked out of the room. His mom's heart sank with his...should she let him keep the fish? 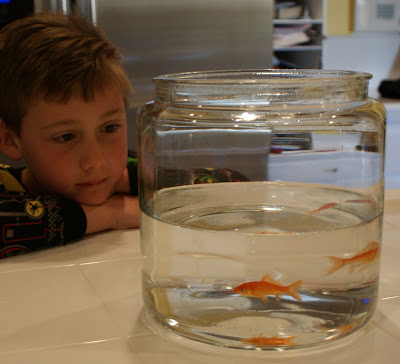 I KNOW THE ANSWER! I AM NOT PEEPING!! YOU GOTTA READ THE STORY TO FIND OUT! IT IS A GOOD ONE! ♥Emmy

this is the ghost of Gonzo. i love you and want to you to keep the fish in my memory. if you keep the fish, LET THE BOY NAME THEM AFTER ME!!!!! (btw oliva was really yummy!)

You should name it Douglas.

What a cute story, Jen! I can't wait to see how it is going to turn out :-)Monica

Jen, love this story!! I can't wait to read the next chapter!!