a boy and his fish - chapter 2

if you would like to read the prologue and chapter 1, click here.
Chapter 2-
They say that everything is brighter after a good night's sleep. As Dayton tip toed down the stairs, fully expecting the fish to be floating on their bellys, he was not only excited to see them alive! But he was also excited to see his mom with a smile on her face. "We can give it a try."

His heart jumped! The day had finally come where he could have his very own pet! His mom quickly dove into all the warnings of, "...they might die soon...don't get too attached...we may not even want to name them..." Dayton barely even heard her, he was just so happy!

Finally the time came to get them a home. Dayton had a good amount of money in his bank account and knew he could buy the fish essentials. On the way to the pet store he asked his mom, "Is this a want or a need?"

His mom answered, "The fish were a want, but now the food and a home for them are a need."

Dayton thought about this and began to get nervous about using his own money. He said, "How can I earn money to put it back into my bank account?" His mom smiled and hoped he would not worry.

The pet store was fun and exciting. Dayton had always gone into the fish section hoping and wishing the day would come. Today was the day! He picked out a filtered tank, some gravel (after carefully evaluating each and every color) and a net. He even priced the goldfish and began to plan how to pay for replacement fish. The store worker explained that the fish would probably die within the first week since it is a fresh, new home. She also explained that when he replaced the dead fish the new ones would probably live much longer.

At that moment Dayton confirmed that these fish were named Nemo & Marlin : Set 1! 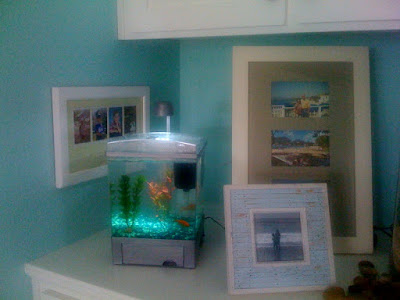 ohh...you just made his day!

i love those little fish!!

We've been through our share of fish too! Once we got this fish home, ours has lived for over a year now. Fingers crossed :)

aw yes, the joys of taking care of fish! Enjoy the many trips to the pet store and the constant clean up of the tank! :) No, really it's fun and it is the easiest pet! Miss you!