To be perfectly honest, The Beijing Zoo doesn't have the best reputation. This is why it is a place where I have wanted to go, but was apprehensive. So when a friend came into town and wanted to see a Giant Panda I decided it was a good time to see what the deal was for real.

You will read many reviews online about the conditions of the animals and zoo quality. You can also see videos online of rude Chinese patrons harassing the animals to get their attention. These are the reasons many Beijingers stay away.

My take on the zoo...
Everywhere in Beijing places are over employed, meaning there are too many workers for the job. This was the exact opposite at the zoo. The only employees I saw were the ones manning the ice cream/food carts. At other zoos I've been to you see zoo keepers tending to the animals. I didn't see one. I thought this was a bit strange considering we were there for multiple hours. With that being said, all of the animals (except the lemurs) were uncharacteristically sedate. I don't think it was necessarily nap time for the various animals I saw but they were all sleeping or chilling out. After a while it made you feel sad that they were very unstimulated and bored. 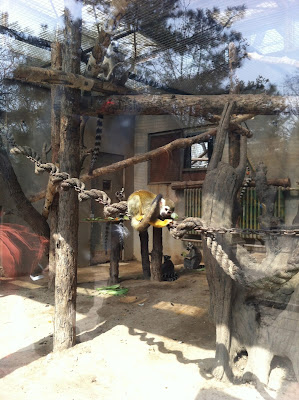 We did see our fair share of people banging on windows to get animals attention. We also saw a man throwing cherry tomatoes at The Brown Bear to wake him up. It worked and the man continued to throw the tomatoes to the bear for food, even when it clearly said to not feed the animals.

Should you or shouldn't you visit the zoo?
Depending on how much time you have in Beijing, the zoo is definitely an attraction that should fall below the essentials (The Forbidden City, The Summer Palace, The Temple of Heaven). If you are dying to see a panda in "real life" and know this may be your only opportunity, I would set aside a couple of hours in a morning and crank out the China animals. The zoo is not super large so seeing it does not take all day.

One thing I wanted to do was hop on a boat (available from inside the zoo) and travel up the river to The Summer Palace. Unfortunately, we were a few days early for the boat to open. It is available spring and summer (April 1).
I would recommend doing this if you plan on visiting the zoo.
Posted by Unknown at 5:21 AM