Thirteen years ago today I was married.
In many ways I still feel like the girl in these pictures (just with extra pounds and two little ones). 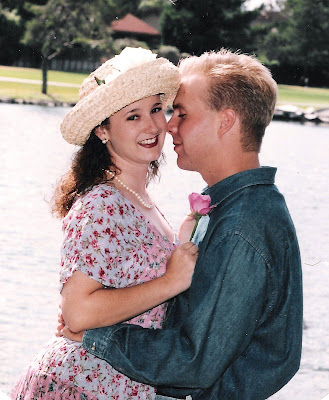 I was living in Southern California while finishing up college. I was recently baptized in the Church of Jesus Christ of Latter-Day Saints. I was having a great time dating! I was also looking ahead to my upcoming graduation and moving to Northern California to begin my teaching credential. I WAS NOT looking to get married! I had heard many of our friends speak of him, as he was soon coming home from serving his mission in Japan. I was interested in who this guy was. When he came back, he immediately began dating another girl. That was okay, I was totally interested in someone else (who later became a groomsman in our wedding).

My first impression of him was that he was a slacker. I was in charge of social events for our church group and he never came to any of the meetings he was supposed to be at. I remember giving him a hard time...and so the nagging began. From that point on we became quick friends. I even remember ditching a class because we were so involved in a conversation. He would discuss his "girlfriend" and I would give him advice (mostly to break up with her). We spent a lot of time together and my feelings became more than just friends. There were a couple of other girls after him too. On Halloween, while he still had a girlfriend, he helped me plan and throw a party. I remember imagining that we were married (so corny). We also went on a retreat in the mountains, he STILL had the girlfriend, and we talked and danced and I really started to become smitten. Soon, we were playing in a softball tournament together and I rode alone with him in his car. While sweaty -with a baseball hat on -I said, "We should try dating sometime. I think you're cute. I think you think I'm cute and we get along really well. I would treat you wayyyy better than she does." Wow, that was mean to the other girl! And guess what he said??? "No, I really think it is going to work out with her."

Ugh! "Oh well" I thought, "I'm moving away in just a couple of months anyway." A few days later I wanted to talk to him about the situation to make sure things were not weird between us...Well, they were! He still wanted to continue things on with her, but it was awkward. Then, a couple nights later he called and said, "How about Saturday night we go out and see what happens?" We went to Newport Beach and sat on the beach and talked. It was there that we both knew we would spend the rest of our lives together. When my family found out I was engaged they said, "You're not even dating anyone!" 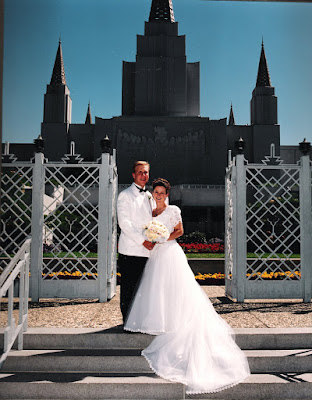 Our courtship was unconventional. We went from friends to engaged in just three months. I did move home and we spent our engagement apart. When we finally got married, on August 12, 1995 we knew we would have an eternity of love and adventure ahead of us. And for the last thirteen years that is exactly what it has been!

The top thirteen reasons I am in love with him ~

That was just lovely Jen. I enjoyed that courtship love story very much. I think you are meant to be together forever.

I love the pictures too. It is beautiful near the temple. So happy for your 13 reasons. You picked well and are certainly blessed.

Hey, no pictures of me from the blessed event? Plus, you forgot to put in there the real first reaction when you announced your engagement...everyone's face when I blurted out, "And her last name is going to be 'Butt'". Good times! haha. No really, Congratulations and keep on lovin' each other!

What a great post! I loved it, and the pictures are so cute. Happy Anniversary!!
Karen

Happy 13th Anniversary!! My sister in-law and a friend were married on this very same day!! Cute pictures of the 2 of you!

mark looks so young! i love the first picture and your story. happy anniversary!

I LOVE the picture. Hubby looked so young and dashing and you still look the same...with shorter hair. Congratulations on 13 years!!!! I am heading towards....gulp....16!!! Can you beleive that!?!?! Time flies when we are having fun doesn't it?

you guys are so cute!! i LOVE that first picture. mark looks so smitten!

this is such a sweet love note to him. i love it.

What a great story! Congrats on the lucky 13! You are such a babe!

Congrats on 13 years! I cracked up when I read "and so the nagging began"!!!

What a sweet tribute to M! You are such a great wife.