Temple Fairs are how Chinese people spend the time off of work during the Spring Festival holiday. Parks decorate and are filled with vendors. The streets of Beijing are empty but the parks are jam packed with people. 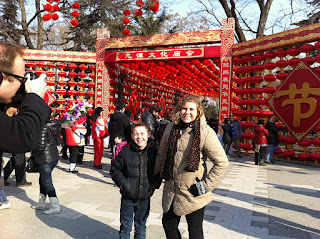 We chose to go to LongTan Park for our first (and probably only) Temple Fair. 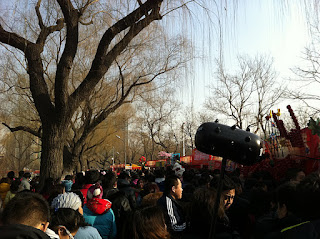 Millions of people crowd around stalls selling garbage stuff. Blow up 1,000 lb mallets were popular, as were fake plastic apples piled on a stick. Since our kids just received their hongbaos we let them choose some things to buy. Both bought some wooden puzzles. 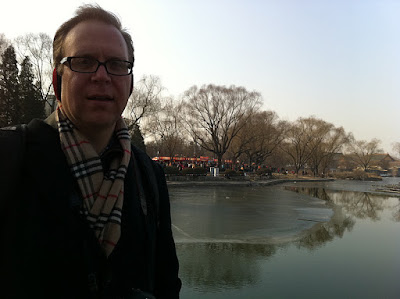 This park has a lake in the middle, as do many others. You can see the crowd of people over hubby's shoulder.
Another section of the fair is the carnival game section. It cost 20 yuan ($3.50 USD) for 10 tokens. Most games cost 10 tokens for 2-5 chances. Even if you did not "win" you still walked away with a small trinket. 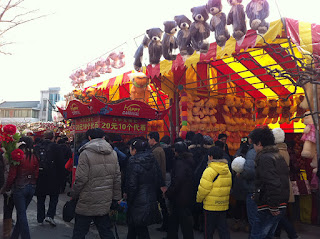 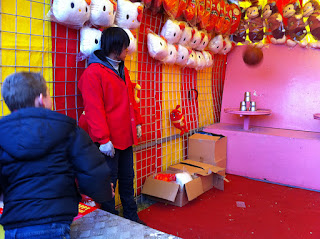 The next section of stalls were the food stalls. Many traditional Chinese street foods were for sale. I was wanting a "treat" but no deep fried Oreo's were to be found!
Our kids could not win the stuffies they wanted so they bought them. E chose a dragon to honor the year of the dragon. Hers cost 70 yuan ($10.50 USD). 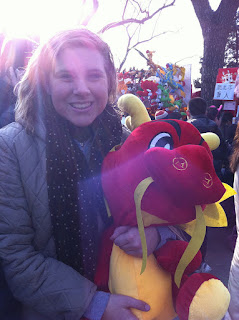 I cannot remember how much D's "Planet VS Zombies guy" cost. 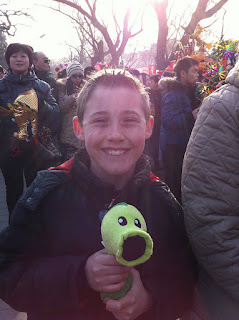 This game of chance below was the funniest of all! 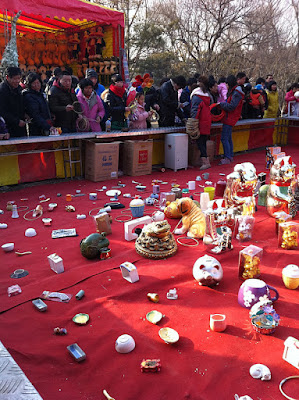 You pay for rings to toss around junk! Literally these were dirty, mismatched, sometimes broken things that looked like they were just picked up at a yard sale. There were also boxes of remote control helicopters but the boxes were too big to even hook on the box. That didn't stop people from trying! 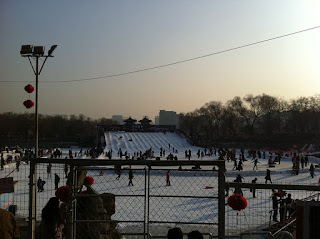 Then there is the snow play area. There was a section for snow ball fights, sledding, building snowmen, etc. Looked like a lot of fun! 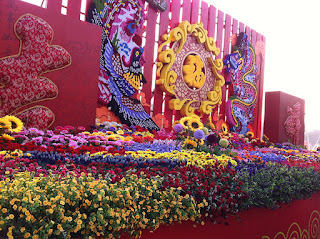 This display was at the exit of the fair. As we were leaving we saw a fist fight between two men. It escalated quickly. The funny part was that they were fighting right in front of policemen who just stepped out of the way as they punched each other. A man's girlfriend tried to break it up and she got punched in the face. The police finally stepped in when one of the guys was on the ground.
The bottom line...a Chinese temple fair is just like an American street fair (minus the beer). It was fun to do once, but we have crossed that off of our list.
Posted by Unknown at 6:25 PM