I do not know what has come over me this week, but I am so tired of things that just do not work around here. So I have taken the bulls by the horns and committed to fixing some more problem areas.
We have lived in our home for five years now. I always disliked the kitchen faucet and to my luck it began to split which meant I would get sprayed all over when at the sink. First, hubby wanted to "fix" it. I quietly bit my tongue while he masked it with fiberglass. Needless to say, it looked horrible. I went straight to the store to replace the faucet. We now have a pretty new one that works perfectly. Oh, and they gave me ten percent off because the box had been opened. Hubby was happy about that! 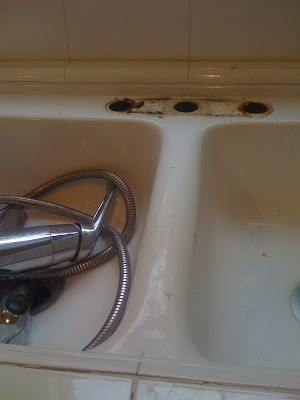 Sorry for the following long story. Let's just say that electricity in our eating nook was considered a luxury for the past eighteen months. It all started when we took down the chandelier in the nook and put it in the family room (seen here) due to scale. I quickly made up another chandelier for the nook, which blew out the electricity. Hubby went up three or four times to try to fix it, but became too frustrated. A great friend came over and took care of it for us in a matter of 45 minutes. What would I do without great friends and their hubbys? 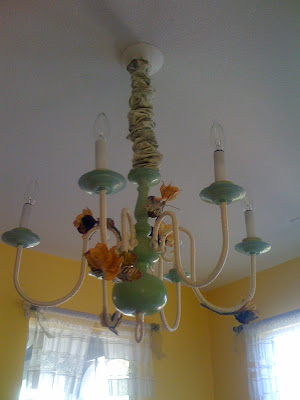 This is how the chandelier looked when I quickly mocked it up eighteen months ago. YUCK! But since it was this chandelier that caused the whole problem, hubby told me I better use it. 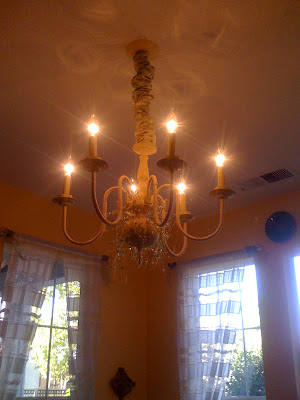 So I climbed up there, got rid of the flowers and green paint and it looks much better. The best part is that it works! Electricity is not longer a luxury!

It always feels good to me when my home projects seem to really be finished...yet there is always another one in line!!!

That looks really nice Jen. It really brought it up to date and brightened things up. Literally. Your a motivator. That's what you are.

Great to get projects done and since yours were such important ones, yay!!!

The chandelier looks great!!
I love restoring old fixtures the next one I want to start is in my basement. I'm waiting for the weather to warm up a bit.

Wow, what a transformation! It looks great!