If you would like to see the prior posts for this trip visit here & here
Part of the allure of taking this particular cruise was the fact that hubby had lived in this area of Japan for two years while serving as a missionary for our church. While we had visited Tokyo as a family he has never before had the opportunity to take us to some of his old stomping grounds. This was a dream come true for all of us.
We had the cool opportunity to have a full 24 hours at this port. We were able to disembark the ship at about 6:00pm. We walked the very short walk to the subway and headed to the Osaka Castle. This castle was built from 1585~1597.
The grounds were large and peaceful. There were joggers and walkers scattered throughout. The one kilometer square is surrounded by an outer moat. The inner moat is dry. 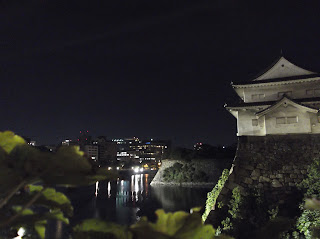 After walking around the castle we decided to head back to the ship by subway. Below is a quaint Japanese restaurant next to McDonald's.
After having a good nights sleep on the ship, we woke up early and walked to the subway toward the Shinkansen (bullet train) station which was headed for Kyoto. Can't say we didn't use public transportation. Lucky hubby speaks Japanese!
Of course we HAD to ride the bullet train to Kyoto.
Once there we took a taxi to the Golden Pavilion or Kinkaku-ji.
Kinkaku-ji, also known as the Golden Pavilion, is one of the most visited sites in Japan. It is now a Zen Buddhist temple, but was originally a villa belonging to a powerful statesman dating back to 1397. 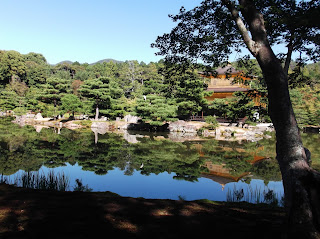 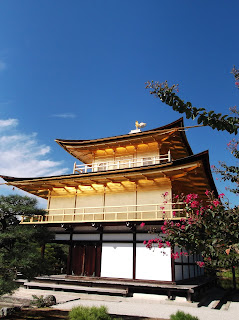 There are many building surrounding the pavilion among the meandering gardens. This spot housed outdoor food stalls offering yummy samples. It reminded me of Costco. 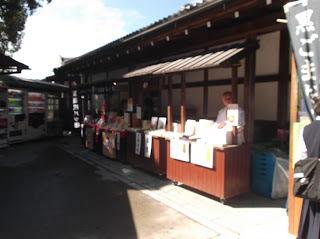 After leaving Kinkaku-ji we hailed another taxi. The driver was the sweetest, chattiest man! Such a contrast to the taxi drivers in Beijing! He loved speaking English to us and showing us pictures of his beloved Kyoto. He took us to the Kyoto station where we would head back to a section of Osaka we wanted to visit.
It is difficult to not compare and contrast Japan to China. Besides the taxi drivers there are many other differences. For one, they drive on the left side of the street. But striking differences are the cleanliness and conduct of the Japanese cities and people. The streets, shops and subways are immaculate and the people act with the utmost politeness. And of course the toilets are SO AMAZING! Click here to see why.
Despite Japan being friendly and clean, there is one main reason why I would be very apprehensive about living here...navigating the train system! I had difficulty reading and deciphering the subway and JR maps while alone in Tokyo a few years back and it was not much easier now with hubby who speaks the language!!!
We took the train back to Osaka to an area called Umeda that hubby was not able to go to while on his mission. It was known for having too many bars and temptations. Since it was daytime and years later we decided to head there now.
Hubby has always loved an Osaka dish called okonomiaki. He has made it for us several times back home but it was a treat to find an authentic restaurant in the region it is known for. It was very, very good!
This mall had a few shops that I could have spent a few hours and many dollars in.
Umeda is a shopping mecca, especially for electronics. 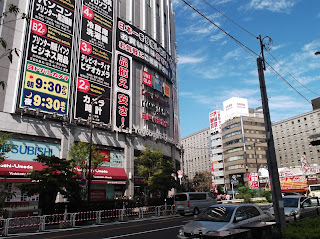 One spot that hubby was allowed to visit, way back when, was a foreign bookstore in the subway station. He wondered if it was still there because this section of town was completely destroyed during the earthquake. After looking for a minute or two, we found the exact bookstore. Amazing since it has been almost twenty years! Foreign books are a treat since they are hard to find in Beijing!
Posted by Unknown at 7:27 AM