The Great Wall of China ~ HuangYaGuan

We were so excited to learn when we moved here that the congregation of our church always goes and stays the night at The Great Wall and holds church services at the wall. After much anticipation, the weekend had finally come. It was arranged that our group of about 250 would occupy the entire hotel, while some would camp on or near the wall. This is a tradition that has occurred for a long time here and we knew nothing like this would ever be possible in the United States due to church guidelines (not to mention there is no Great Wall in the US).
I was so excited to go and see The Wall for the first time. Hubby and D had already been there with the Cub Scouts. Unfortunately, our shipment still had not arrived so we were missing crucial items that would have made this weekend trip much more enjoyable and warm. However, with lots of friends offering us warm clothes, sleeping bags and a tent we were able to make it through just fine. Next year we will be more than prepared.
We met at the church at 9am on Saturday and filled three buses. We headed about two hours to the province of Tianjin to a section of the wall called the Huangyaguan Pass at the Bangalang Mountain. It was neat for me to see something of China outside of Beijing.
Sadly it was one of those grey China days...so these pictures will really not do the scenery much justice at all. You will just have to come here and check it out for yourself!
We quickly stowed our bags and gathered with a few families to go for a "hike". The families that we were with all had cub scouts and our den leader decided this would be a great opportunity to sign off a three mile hike.
Since the group we were with had already done the left section, they decided to do the "right section" this year. See below...I thought that we were heading up to that first tower at the top of the hill...piece of cake so off we went!
This is the section of the wall that The Great Wall Marathon takes place! Can you imagine running 26.2 miles up this mountain? We were with a guy who did it and actually lived to tell us about it! I had contemplated doing the half marathon in May of 2013...but after seeing it I think not. 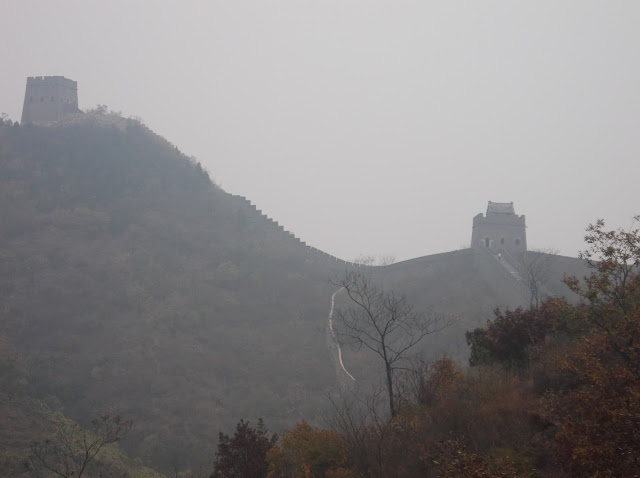 I decided my time was done. I know that perseverance is not my strongest attribute. I don't have a need to acquire bragging rights and there is no reward at the end, so I decided to head on back down with one of the girls. Everyone else, including many children (of course, D) went on.
The hike back down took about 45 minutes and our knees were sore and our legs were shaky. But I guess we could take pride in the fact that we really did "Climb the Great Wall"! They really should pass out those shirts for free! Maybe I would've endured on if I knew that were the case! Instead our room was now ready and I was able to see our accommodations....oh wow!
Hubby was very glad that he was not responsible for arranging this room. We just had to grin and bear it!
This was the outside of our room, which was absolutely gorgeous! 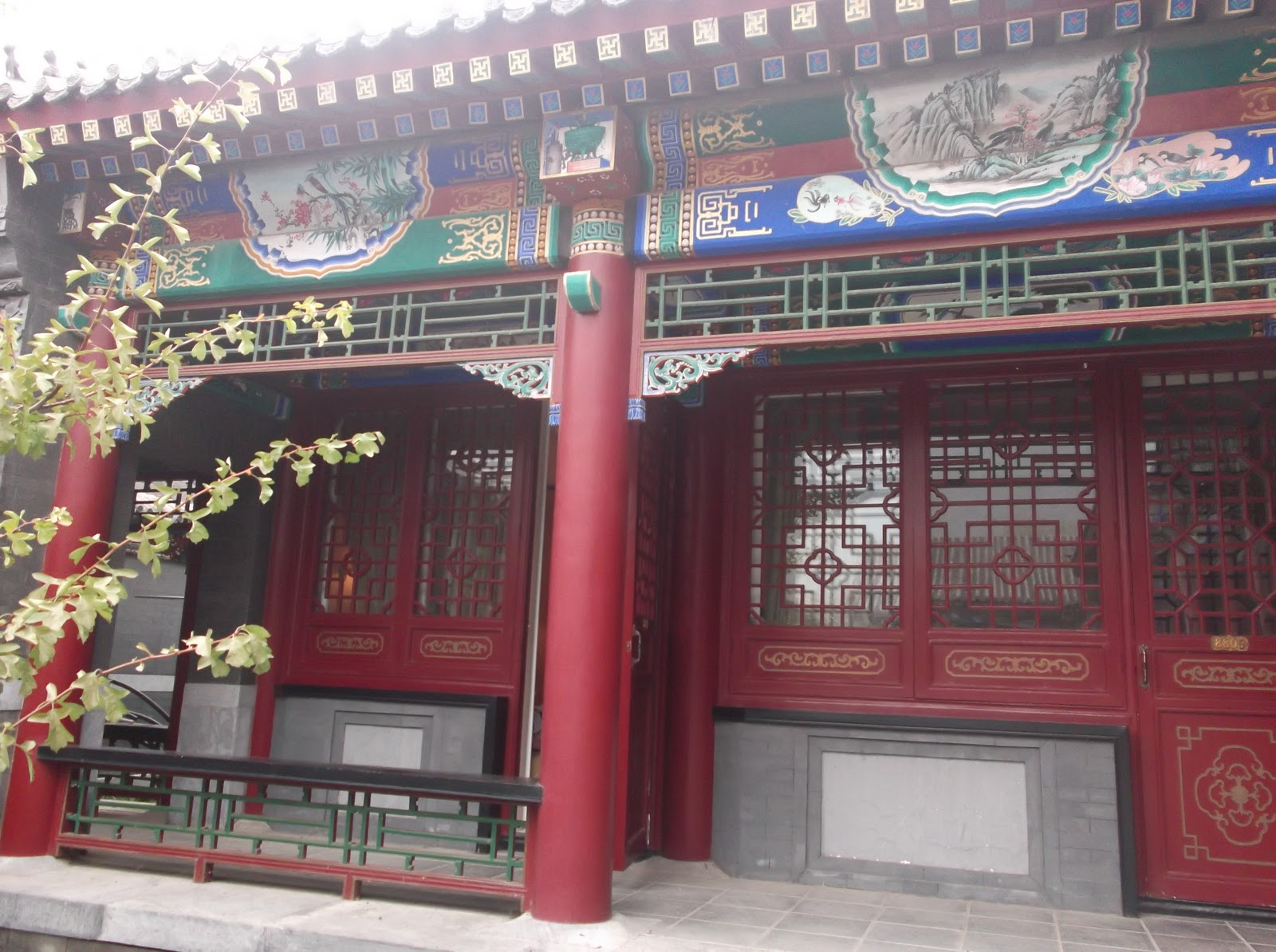 Besides being at the Great Wall, the best thing about this trip was being with tons of other friends! We barely even saw our children, they were with friends the entire time! Below is a mini Great Wall and labyrinth the kids hung out with all afternoon after the hike. The boys all bought weapons (crossbows and swords) from a vendor and played war until dinner time. They were in their glory while the teenagers hung out and flirted with each other! 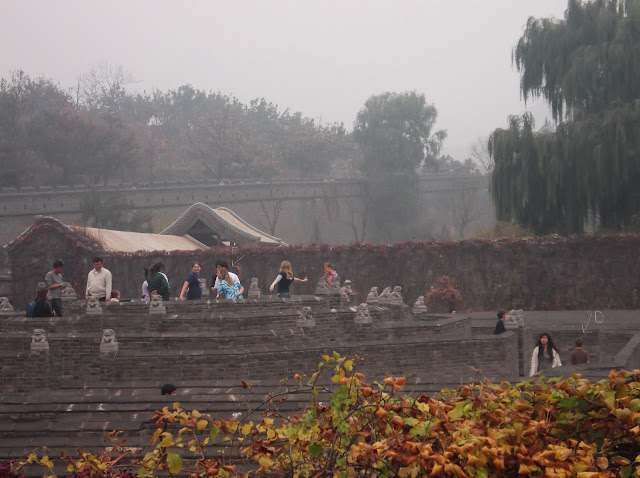 While the kids were occupied with friends, hubby and I decided to walk up the left side of the wall. I made it very clear that I was not climbing up anything for the rest of the day! 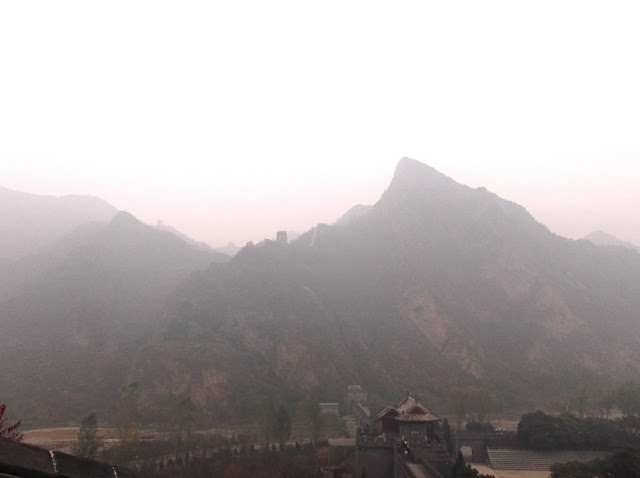 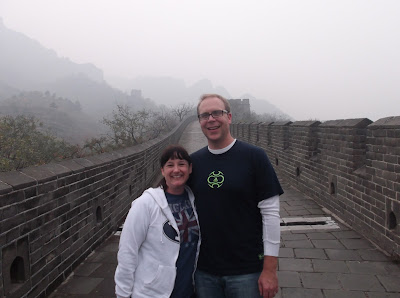 The hotel provided dinner for us. It was a Chinese fare that included three meat dishes, five veggie dishes, a fruit salad and rice.
Without our backpacking equipment only D arranged to sleep outside in a borrowed tent.  A group hiked back up the wall about 30 minutes and camped in one of the towers. D camped out in the courtyard in his own one man tent. He is pretty hardcore as he set it up and took it down all on his own. I think he had the cleaner accommodations...maybe not warmer though.
Breakfast was provided by the hotel at 7:30am. It was a Chinese breakfast with toast, fried bread, baozi (steamed buns), sliced cucumbers and tomatoes, and roasted peanuts. A woman at our table was smart and brought several batches of homemade cinnamon rolls...next year! 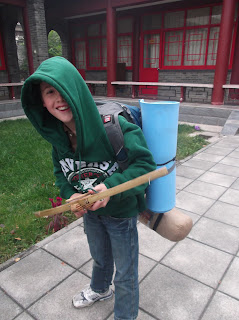 The whole purpose of this trip was to hold our worship meeting here next to The Great Wall. Sadly, it started to rain just before 9:00am when church was about ready to start. No problem! Everyone gathered their blankets and jackets and we all lined the courtyard to sing hymns, partake of the sacrament,  listen to speakers and pray.
This was an incredible experience that I am grateful for! It was amazing to be united with so many people that share the same beliefs (and the same language!) at such an extraordinary place! If I have more experiences like this, China just may grow on me.
Posted by Unknown at 7:58 AM

The wall really is amazing isn't it? I'm always excited when someone experiences it for the first time. That said, I'm glad you decided to turn back when you felt the time was right, otherwise you might have had bragging rights to my unfortunate Great Wall experience of this past summer - After a far too strenuous and energetic hike in +100F temperatures, I passed out and fell off the Great Wall. :)

I would have been right there with you climbing DOWN the mountain! I was excited for you in the story when you got to go back to your hotel room, until I saw it! Wow, everything on the outside is so beautiful...while everything on the inside looks pretty gross.
What an amazing experience! I am grateful you all have friends there :)
Steph