Fukuoka is on the southern Japanese island of Kyushu. Since we were not familiar with Fukuoka we decided to use the cruise line expertise and book an English speaking tour. We set out at about 4:00 pm, dawned with our umbrellas and hoodies, as it was sprinkling.
We had a sweet Japanese tour guide who spoke amazing English. She told us that she had never traveled out of Japan and learned all of her English from a radio program.
Why can't I do that with mandarin?
Our first stop was a city park that was built on the remains of the ancient castle. There are still remnants of the rock wall that was to protect the castle. 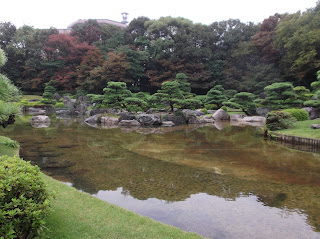 Just outside the park is a lake. Our guide told us that this lake used to be the ocean. All the land built on the other side is reclaimed land. 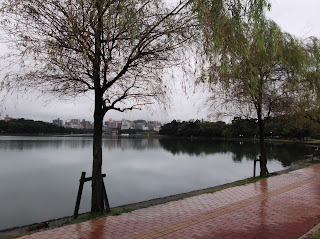 Our next stop was the Fukuoka Tower. We went to the top to see the panoramic view.
Our next stop was a shrine right in the middle of the city. There were even people walking through it on their way home from work. An interesting thing at this shrine were actual anchors from Mongol ships that were set to attack Fukuoka in the 1200s. A typhoon hit and sunk the ships before the attack. Kamikaze (divine wind) is what this typhoon is referred to. 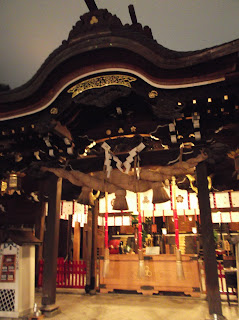 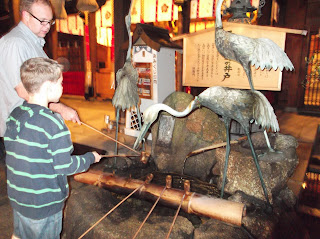 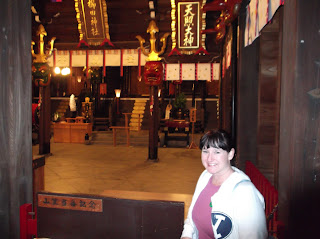 Throughout history Fukuoka has been called Hakata. The city is divided in two by a river. One side of the river is known as the shogun side and the other is the merchant side.
At the very end of our tour we had about ten minutes to wander through these stalls. We were able to find a 100 yen store ( $1.00 store) which are awesome in Japan! The kids got origami paper and I got a much needed measuring cup. So luxurious!
Posted by Unknown at 12:21 AM