One of the nice things about living in China is that National Holiday week is in October and that means we all have an entire week off! We were told that many, many come to Beijing since it is the capital so we chose a Royal Caribbean cruise to Japan and South Korea for our holiday travel away.
Our ship was the Legend of the Seas. We appreciated it being an American cruise line, there were small amenities from our culture. Most of the cruisers were Chinese and most of the crew spoke English and Chinese. There were 2,500 passengers, 90 Americans and 100 other foreigners (Canada, Australia and Europe).  Most of the foreigners were like us who now live in China. It's a small world as we met a family who are family members of my sister's friends...did you get all that?


This is the first cruise for D who turned 10 just days before we left. This is E's second cruise, although she does not remember much about her first cruise. The kids had plenty to do and really loved the independence of being on the ship. They both really loved being able to charge anything to our room, including many trips to the arcade!


Of course food is such a HUGE part of a cruise. The food was okay. We have noticed a decrease in the quality of the food since our last cruise ten years ago. Of course the amount is plentiful. I felt the food in the dining room at night was the only food that was above par. It was nice to have real American burgers and pizza though. The boys really loved the self-serve ice cream by the pool. It is definitely a sign of the times when certain things there are an extra charge. Some examples were Ben & Jerry's ice cream, steak dinner, fresh squeezed orange juice,  or Seattle's Best coffee. 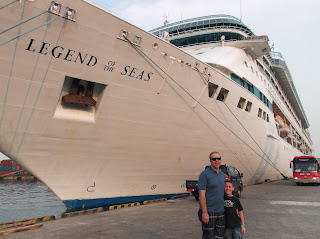